My favorite rapper, Andy Mineo, caused quite a stir on twitter by asking this question:

Do you guys really think if a person uses “profanity” (words we’ve given meaning) in their music they couldn’t possibly b Christian? Why?

I can’t figure out his intentions. It appears to have something to do with Kanye West’s latest album and the fact that kanye said it is a gospel album though it contains profane lyrics. Whatever compelled Andy to pose this question isn’t my focus here.
To the many who lashed out at Andy, I think you were all wrong. I get your point though. Profanity in Christian music seems so obviously wrong that you think the topic needn’t come up for discussion. But hey, he said he was just trying to start a conversation. Believe it or not, that’s what he said his intentions were, so let’s all just leave it at that.
Is it cool for a Christian to cuss in a song? My answer is a big NO. Simply because the bible is very clear on the matter. The bible speaks against the use of profane words in our speech. These days it is very difficult to point out someone’s mistake without appearing to assume moral superiority over the person. So to all who may think I am judging you by stating what the bible says … I am not. No one is perfect. Nevertheless, I find it extremely offensive that the bible is the last book people expect you to make reference to in a debate on a Christian topic. That doesn’t even make sense. How do you get offended when I refer to the constitution of this country during a debate on any of the laws of the land? The bible is the standard. Forget the standards set by Hollywood or the West. This isn’t one of those issues that the bible isn’t too clear on. It isn’t one of those pesky issues in the bible we are expected to apply wisdom in its interpretation against the backdrop of the values of the world today. In more than one verse, we are told to desist from the use of foul words. Here are a few of those verses:

Ephesians 4:29 ‘Let no foul word or polluting language come out of your mouth…’
Colossians 3:8 ‘Now you must put all away, anger, wrath, malice, slander, and obscene talk from your mouth’
Ephesians 5:4 ‘Let there be no filthiness nor foolish talk nor crude joking which are out of place…’

I could go on and on and on with quoting scripture. At this point I believe it is clear what the bible says on the issue of profanity. Does a person lose his salvation by using cuss words in his speech? Of course not! To even assume that, means one has little respect for God’s grace. You cannot out-cuss God’s grace. There is forgiveness for anyone who sins but this isn’t a license for anyone to consciously continue in sin. However, what is wrong here is to put up an argument against the fact that cussing is a sin. You and I do not determine what is wrong. I could have quoted from the book of Ezekiel concerning how wrong it is to mix the Sacred and the Profane, but I didn’t. Often people dispel anything quoted from the Old Testament on the grounds that it is outmoded. So there you have it above, God’s view on profanity in the New Testament.

I had a conversation with a friend of mine a few years ago concerning Christian rap music. And he made a very interesting comment. He commended the rappers for the sort of work they put in making their songs especially because they don’t cuss – seeing that cuss words convey certain emotions that clean words cannot. There is some truth in this assertion. ‘I love basketball’ sounds way too mild compared to ‘I f#&king love basketball’. Therefore he has a point; but is it a good enough point to support the use of cuss words in a song composed by a Christian? According to the bible, human languages are already inadequate especially during prayer.  In Romans 8:26 it states that the holy spirit himself, in view of the limitations of our speech in prayer, helps us out by interpreting our groanings that are too deep to be expressed in words. The inadequacy of human languages is probably one of the main reasons why Christians speak in tongues. God is too big to be described with the same words we use on trivial things. Therefore if the argument for cussing in a Christian song is that certain emotions cannot be expressed in clean language, then that argument doesn’t even hold a drop of water. If the Holy Spirit has to interpret our groanings that are too deep to be uttered in words to the Father, that should tell you how inadequate any human language is. Are you making it any better or worse by cussing?

Secondly, today’s set of profane words are highly sexist and mostly sexual slurs – the F word for example. Even ‘bitch’ is highly sexist when you think about it. A bitch is a female dog. The question is, why is it insulting to call someone a bitch? Especially when it is a show of affection in informal parlance to refer to a guy as ‘my dog’ (a male dog)? That sounds very sexist to me.  The gospel of Jesus has the ability to save souls. Therefore it must be presented in a socially acceptable way. People are highly sensitive to gender issues now. Imagine yourself evangelizing to someone who takes offense at the slightest case of sexism and using the word ‘bitch’ in your submission. Do you honestly expect the person to take you seriously? We can come up with as many seemingly logical arguments as we want, but the fact remains, the existence of profanity in anything Christian, will do more harm than good. Would you be ok with your pastor cussing in church? No? Why? Because the church is a holy place, right? Guess what the bible says about your body. Your body is the temple of the Holy Spirit. What isn’t appropriate to be done in church is very inappropriate to be done by a Christian. I doubt any church will allow its congregation to sing profane songs in the auditorium. Anything produced by a Christian should be worth consuming within the walls of a church. Therefore if a song, written and performed by a Christian isn’t church-worthy, then it is a misrepresentation of Christ.

It is very true that some words in themselves are not profane but gather filthy connotations with time. We must desist from the use of such words too. Black people call each other ‘nigga’ because that is what they are, black. But over the years, especially after the era of widespread slavery, the word has gathered a very derogatory meaning. Hence, most black people take offense when referred to as such by white people – and rightly so. However, the bible uses the word in Acts 13:1 in reference to Simeon who was affectionately called ‘Niger’. We cannot refer to this as an approval of the use of the word even in an informal setting. Why? Because at the time the word was used in the bible, it didn’t mean anything other than the color of a person’s skin. Now it invokes all manner of painful memories of slavery hence black people cannot stand being called that, especially by white folks. We can use this same analogy in dealing with other words that might have gathered a derogatory connotative meaning with time. So far as society deems it unclean, crass and profane we have no business letting it slip out of our speech or even carefully weaving it into songs we write.

Would you cuss at a job interview? Would you cuss on TV? TV stations edit cuss words in their shows, why? Is it a simple case of a secular organization being ethical? I write, so I know inspiration doesn’t come along with a matching language or set of vocabulary, the writer decides which set of words to encode the message in. Therefore though the language used doesn’t determine the worth of the message, it can contaminate it. Clean water is good for consumption but when poured into a dirty cup and poured out again, it is still water but it is just not clean and good for drinking.

Let’s talk about engaging culture for a bit. Very few people have engaged culture better than the Apostle Paul, in all of Christian history. He is a master of the art. In Acts 17, Paul went to Athens, a city ‘wholly given to idolatry’ and debated with their philosophers. That is a typical example of a Christian engaging culture. It was he who said ‘I became all things to all people, that I might save some’. The interesting thing here is, it was he who wrote almost all the verses I have quoted above that speak against profanity. Therefore, if the goal is to engage culture in order to save souls, let’s follow what Paul did and not lose our Christian values while trying to save people. In our world today, Lecrae stands out as one person who is actively engaging a culture that is drenched in the glorification of violence, misogyny, profanity, sexism etc. What does he have to say about cussing? In his song ‘Believe’, he said ‘Me learning how not to curse was like learning to write in cursive’. In this song Lecrae spoke about the things he did right after giving his life to Christ while in college. He actually made a conscious effort to stop cussing. Wow!

One of the greatest misconceptions in Christianity today is that, the only things we are supposed to desist from are sinful acts. A big NO to that. Paul said if eating meat offends his brother, then he would rather not eat meat at all. Eating meat is not a sin. We have the freedom to do a lot of things but both Paul and Peter said we shouldn’t abuse our freedom by using it is an opportunity to please ourselves. Boundless freedom is as ensnaring as the chains of slavery. This is a fact that people do not know. Please, watch your mouth and what comes out of it.

February 10, 2020
Suicide is defined as the act of killing oneself intentionally. I was younger than 10 years when I first heard of a suic... More
Prev Post ONCE SAVED, FOREVER...
Next Post These Fetish Pastors!

There are 8 comments for this article 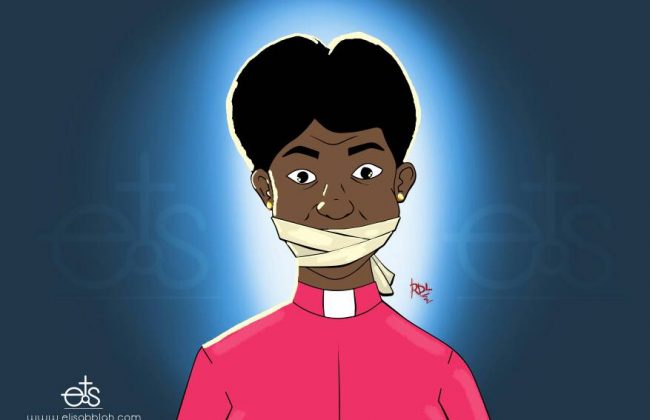